Lithuanian eye on past, present 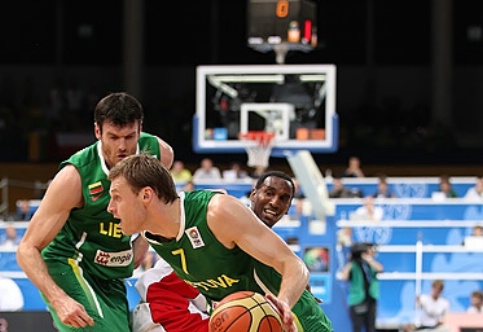 “A journey of thousand miles begins with a single step,” goes the age-old Chinese expression, one that fittingly summarizes the story for the Lithuanian basketball team every four years in the FIBA European Championship – and especially this year, as hosts of the tournament.

A recent impressive win in a thriller against 2010 FIBA World Championship runners-up Turkey improved the Lithuanian side to a 3-0 record in the group stage, increasing the hopes of green-and-yellow clad heavily partisan crowds, who expect no less than a deep trip into the tournament.

But for the hosts, it is about so much more than the 2011 EuroBasket tournament itself. Having won the competition in 1937, 1939 and 2003 – more times than any other existing nation – Lithuania always has eyes on a bigger mission.

Basketball fans from outside the country often wonder just why Lithuania has such a unique love for the sport. “I think it comes down to one word,” said guard Martynas Pocius. “Tradition.” (Though for the 25-year-old, as Pocius himself added, this tradition goes back to 1991.)

Since restoration of Lithuanian independence in 1990, this small nation has not only qualified for each edition of the Olympics to date, but has also battled through to the medal round of The Games on every single occasion, netting bronze medals in 1992, 1996 and 2000: The only other team in the world to accomplish this feat is United States.

Just missing the podium in the last two Olympics, Lithuania is dreaming not only of returning for its sixth straight Games with a top finish in the European Championship, but also to continue its impressive run into the Top Four.

To achieve this, the Lithuanians will need to go as far as the EuroBasket finals; a fallback plan would be to finish in the top six, thus guaranteeing a spot in the Olympic Qualifying Tournament next July.

Devoted to this task of carrying on the tradition, staying at home in 2012 is simply not an option for Lithuania.

Despite the weight of history and their awareness of it, however, the Lithuanians are still taking that step-by-step approach.

“A lot of people are discussing the Olympics already [but] this is absolutely empty talk,” said three-time Olympian Sarunas Jasikevicius, emphasizing the importance of concentrating on the next EuroBasket game.

For him, and for the rest of the nation, the first mile in this thousand-mile journey is here, in the homeland.